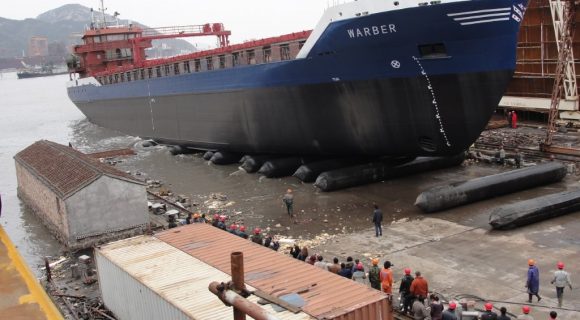 The development and construction

The Warber is ship number four in a series of eight vessels. It is designed by Conoship commissioned by shipping office Wijnne & Barends in Delfzijl. Wijnne & Barends has commissioned Conoship to develop a ship that meets the environmental requirements of today but also fast speed, with the highest ice class, the hold has a large cubic capacity, with different loads at the same time and be able to sail hazardous substances. Also the accommodation and equipment in the engine room had to meet the demands of modern times.

After Conoship had developed the ship on the drawing board and the hull so far met the requirements, the technical service Wijnne & Barends along with a number of captain / owners of coasters who had shown interest in buying such a ship, the vessel was complete developed and equipped. Due to the expertise of the Technical Division and the experienced practice-oriented captain / owners have succeeded the series optimally made to get the required conditions. The ship sails very economical. The fuel consumption per ton / per mile is very little compared to similar ships. The highest ice class gives the opportunity they sail during the winter in the Baltic Sea. With the large cubic capacity many low-density can be taken into the hold while various cargos can be separated by using movable bulkheads. When bulkheads are fully put in the aft of the cargo hold, long project cargo can also be taken. Furthermore, the vessel is equipped with timber lashings so that on top of the hatches timber deck cargoes can be transported. Outside of the so-called. Seca Area * can be sailed on heavy fuel oil for which the engine is equipped with a thermal oil system to heat the fuel oil. There is installed an economizer in the engine room in order to realize a way of heating the thermal oil, and thus the fuel oil without any additional energy.

The bridge is equipped with the most modern navigation and communication equipment.

The Technical Department of Wijnne & Barends has various options explored where the series ships could be built. The choice has been made for a shipyard in the Chinese Song Men. To accompany the constant building, a highly experienced Dutch construction supervisor was employed to take largely present on the site from the very beginning. At a later stage there is added a Chief Engineer attached to the office. A team of Chinese experts and a secretary or interpreter assisted them. All this has ensured that the quality of the series is not inferior to a ship built by a Dutch yard.

The Warber her keel was laid in 2008. On April 2, 2010 the new ship was launched and the Warber was completed in August 2010. From China she sailed to Vietnam to load her first cargo. With parts of a windmill she has crossed the Pacific via Hawaii, the Panama Canal and the Caribbean to deliver the cargo in Philadelphia where it was discharged. Then there was loaded a cargo in Charleston for Liverpool. From that time the ship has been deployed in the European trade.